Too good to be true: The Folding Camera

Photos by Matt Langthorne of ONE20. 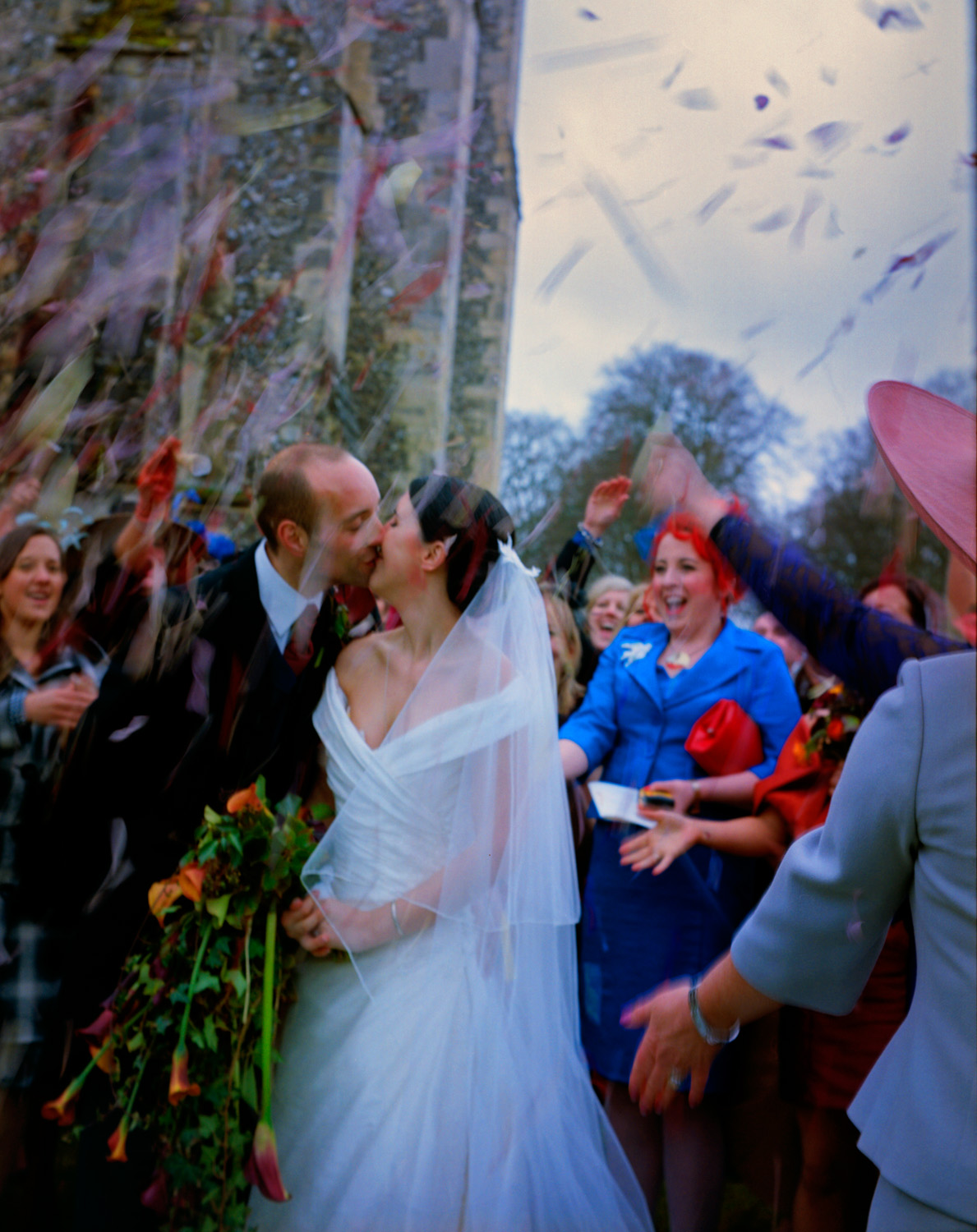 Deal of the Century:

How would you like a 60 megapixel camera with a Zeiss lens, which weighs less than your current DSLR and fits in your pocket?  That sounds pretty tempting doesn’t it, but it also sounds expensive.  So how much does it cost?  Around £20.

Yes, for just £20 you can buy a 60 million pixel Zeiss camera that is light enough, and slim enough for you to carry with you where ever you go.

Obviously there is a catch, and if you have looked at the accompanying images you will have worked it out.  We are talking about an antique, a camera that your Grandfather, or even your Great Grandfather may have had if he shared your interest in photography. 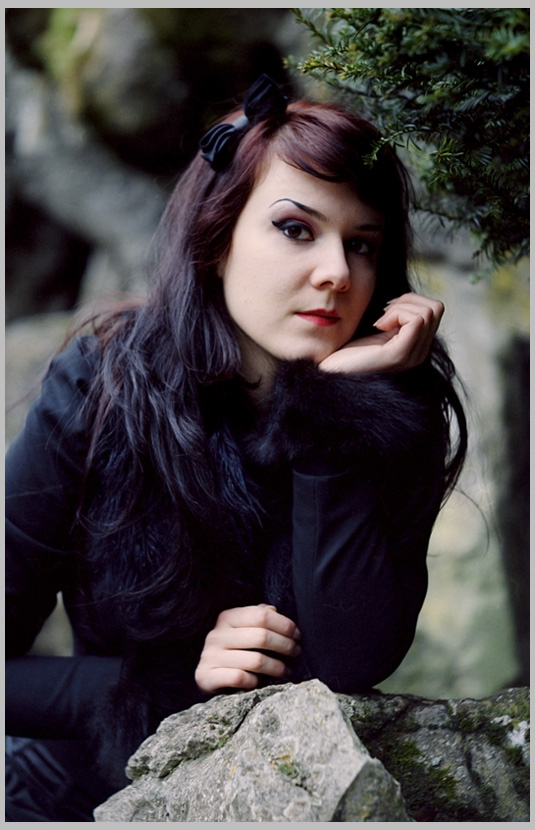 It should be pointed out that the practicality of the collapsible space saving design has not been forgotten.  Fuji released the GF670 (also known as the Voigtländer Bessa III) in 2008, a superb camera packed with modern features, but that will set you back around £1500, you can buy 75 classic Zeiss Ikons for that. 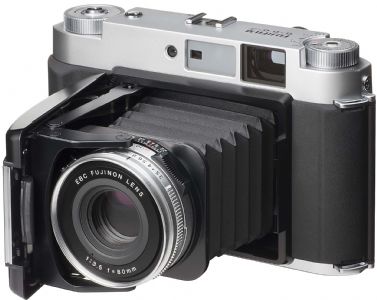 Pocket folding cameras were developed at the end of the 19th century to make photography more portable.  At the time box cameras like the Kodak Brownie were the standard for amateur photography, but they were cumbersome to carry, not very stylish and with a limited exposure range.
The folding design meant that the camera can be compressed to just 1/4 of its operational size, and in doing so protect the lens and shutter mechanism for transport.  It also introduced a certain ‘wow’ factor: when at the press of a button, the flat rectangle transformed into a complex photographic instrument.  People took these cameras all over the world, from the trenches of World War I to the slopes of Mount Everest.
It was not until after the Second World War that, with the advent of 135 film cassettes (35mm) and the small cameras it made possible, that the folding cameras went into decline.
50 years of mass production means that today there is an abundance of folding cameras lying forgotten in attics, at the back of cupboards and elsewhere.  The chances are that you or someone you know will have one, all but forgotten and waiting to be picked up and used again.  Do it!
Now, what makes these still interesting today is that the majority of folding cameras were made to take the 120 roll film.  Introduced by Kodak in 1901, and commonly referred to as ‘medium format’, the 120 format is still available in a variety of colour, black & white, and slide films  This means you can still shoot with cameras like the Zeiss Ikon Nettar pictured!
Just like cameras today, there were numerous models produced, so it is worth doing a little research to see which may suit you.  The 120 cameras were made with frame sizes of 6x4.5cm, 6x6, 6x7 and 6x9.  A smaller frame size means more pictures on a roll, with a 6x4.5cm you will get 16 images, but only 8 with a 6x9cm.  There are also 35mm models, but also some cameras that used now obsolete film formats. 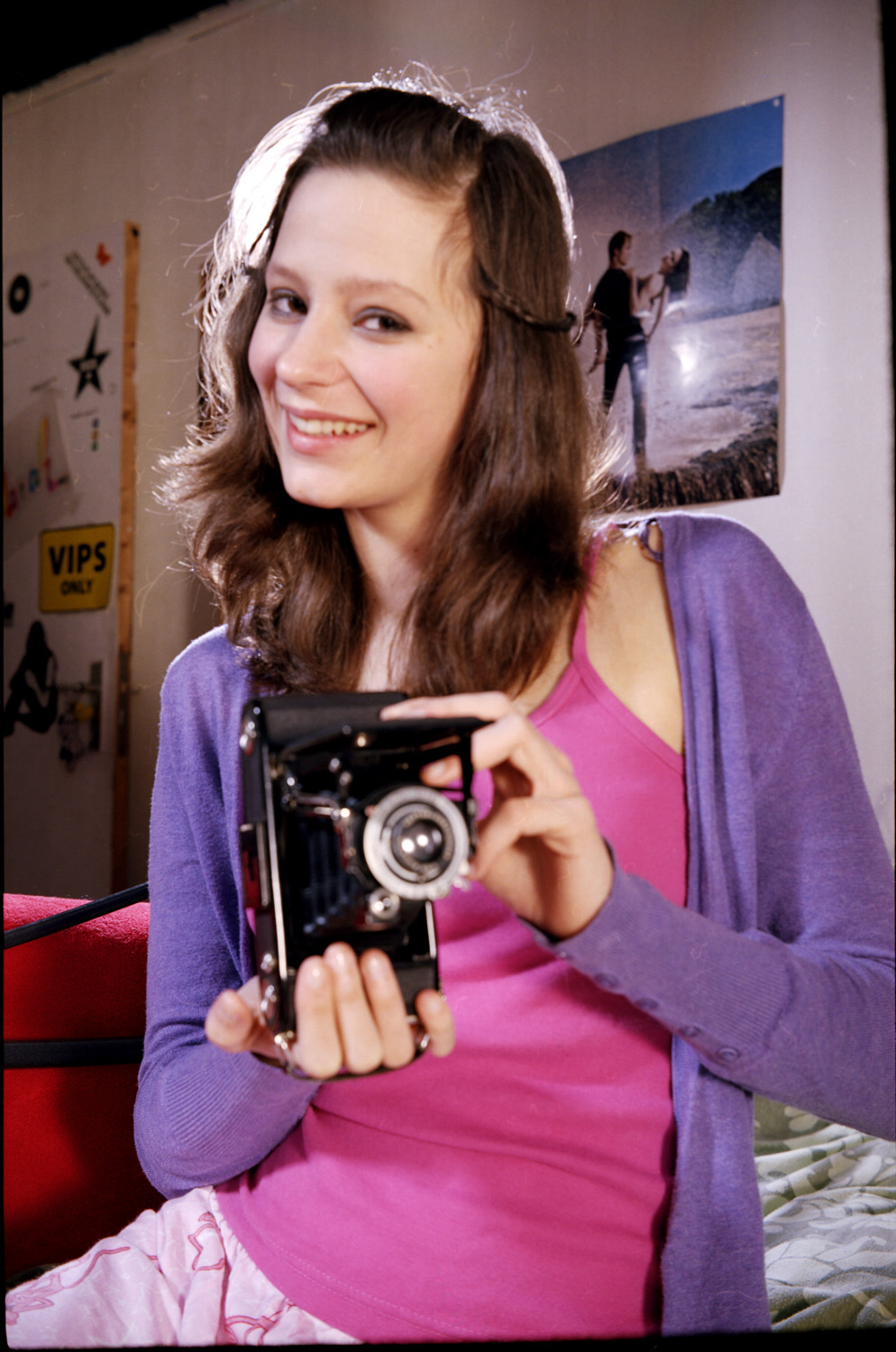 The technology of film has progressed considerably over it’s 100+ year history and the fine grain emulsions now available offer fantastic resolution.  A 35mm frame properly scanned can produce a 20MP image (based on technical data from Fuji Velvia 50 Professional).  A 6x9cm negative has a surface area six times greater than 35mm – that’s 60MP!  Theoretically then, printed at 300dpi photo quality, that would be 53.8 x 30.14 inches (136.6 x 76.6cm) print.
Before you get too excited, let’s do a reality check: 80 years of camera evolution can’t possibly have been in vain.  Could it?
In 1930, there were not many people making A3 prints from their holiday snaps.  In fact, the majority of prints from 6x9cm negatives were, um, 6x9cm contact prints.  The negatives were purposefully large because any enlargement would magnify the flaws in the image; whether caused by the film, the photographer or the camera.  The large negative was there to allow all three a greater margin for error.

The lens itself, Zeiss though it may be, does not have the resolution to match that of the film, and it gets worse.  The lens is unlikely to be coated, thus is susceptible to flare and internal reflections that will soften the image.  There is also a risk of a colour cast or colour shift, as these consumer cameras were made before colour photography was readily available to the public, and so only really intended for use with black and white film.


Before you print anything, you must first take the photo.  This is where the folding camera becomes a real challenge; not only is it entirely manual, but the majority of models have no way of checking exposure or focus through the viewfinder.
The first problem of exposure can be tackled in two ways.  You can use a separate light meter or you can guess using the sunny 16 rule.  Light meters can be expensive but you can pick up an old but working model very cheaply.  It will be worth testing it against a DSLR first, and this is a good way to get the hang of using it.  The sunny 16 rule for anyone not familiar is this simple: on a sunny day, correct exposure will be f16 when shutter speed is equal to the film speed.  For example: ISO200, at f16 = 1/200sec.  Any compensation for lighting conditions or for alternative shutter /f stop combinations can be guessed at from this formula.  That is the way it was done back in the day. 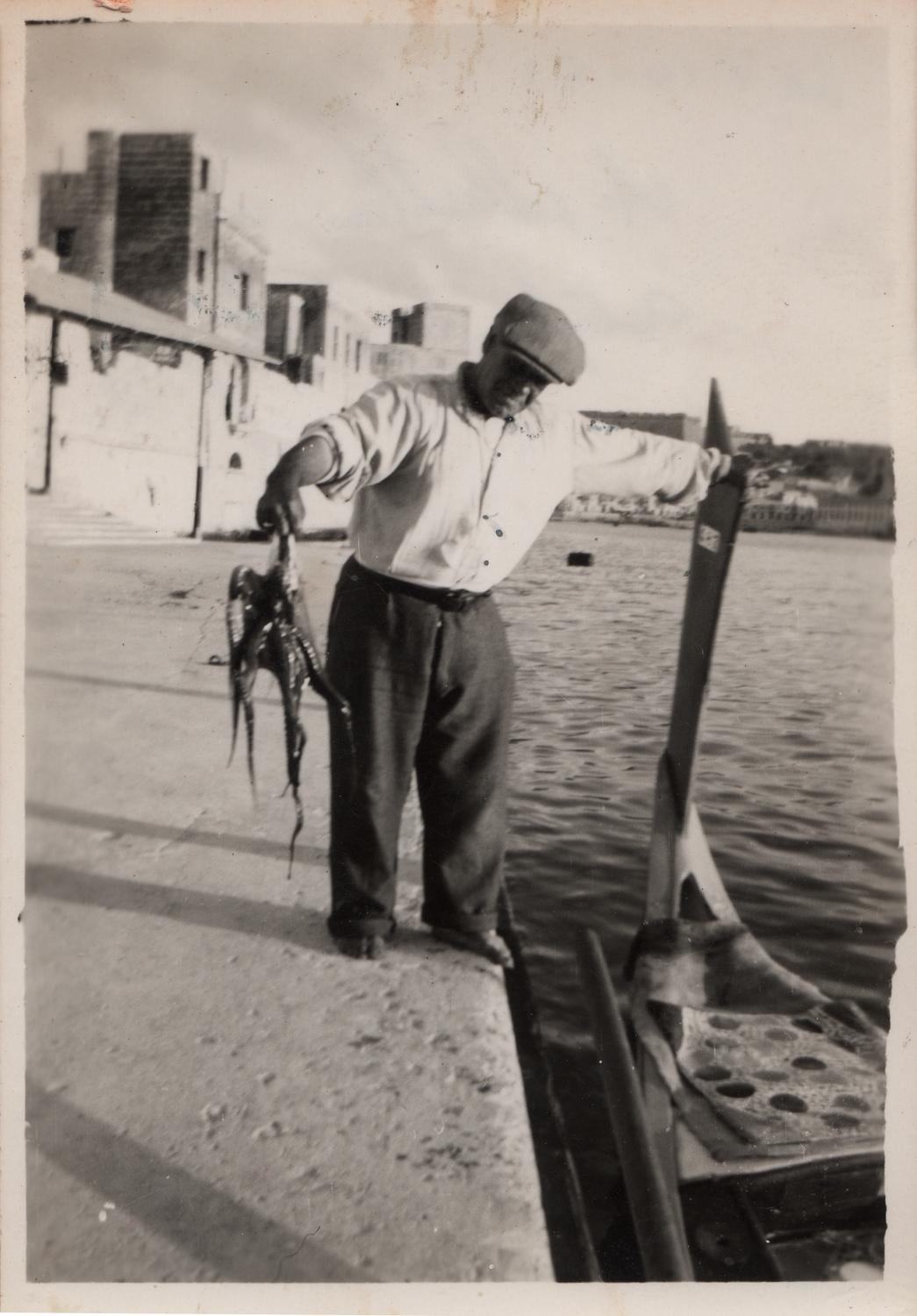 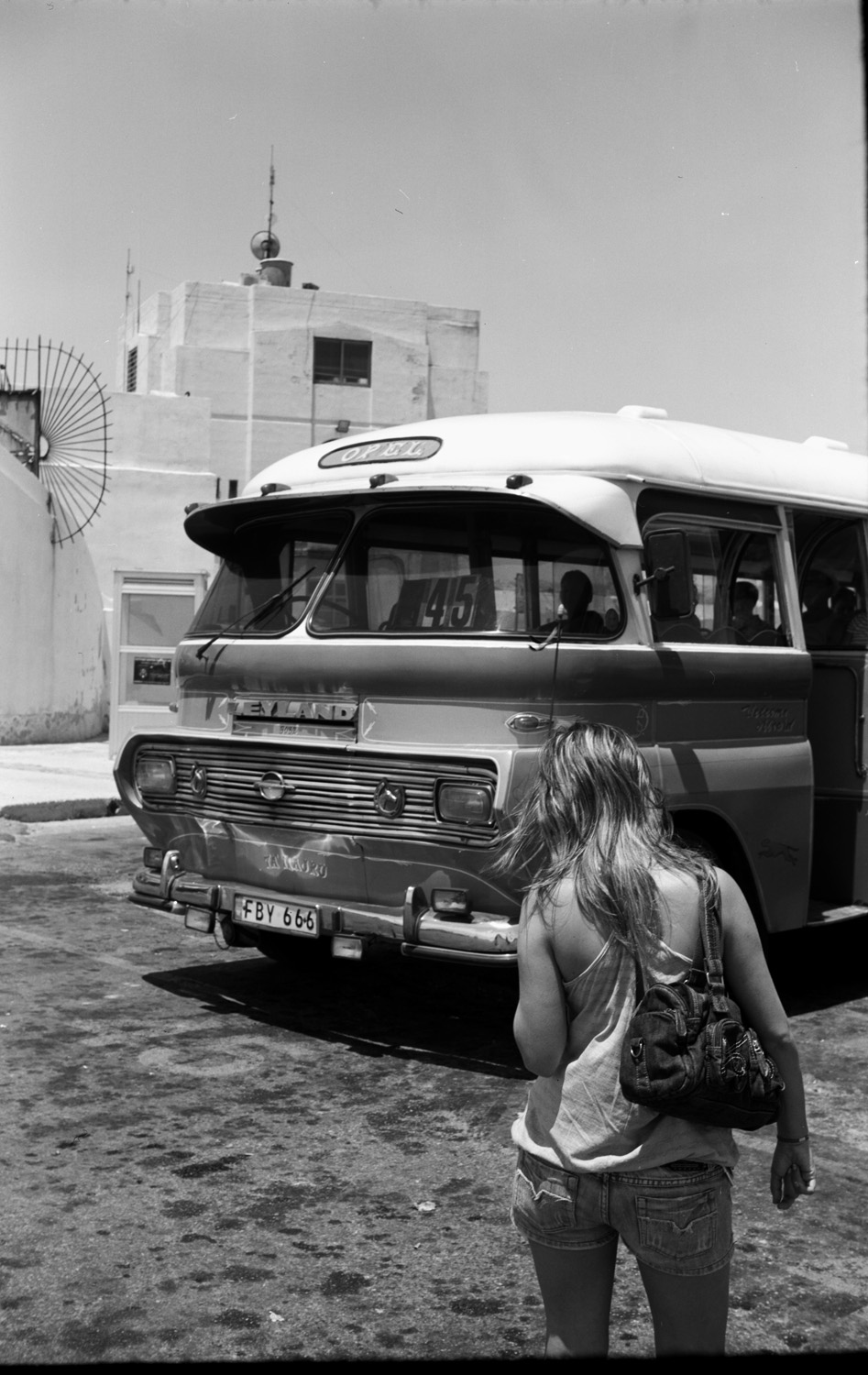 Focusing on most folding cameras is simply guesswork, unless you go to the trouble of using a tape measure.  More advanced models may come with an non-coupled range finder but you still have to remember to adjust the focus on the lens, and obviously there is no depth of field preview!  The focusing ring is marked with distances and also with depth of field indications.  Remember this is a medium format camera, so depth of field in relation to f-stop is significantly reduced.  For a 6x9 frame a standard lens is 105mm, and at f4.5, depth of field is equivalent to a 40mm lens at f1.8 on 35mm.
You must also remember that the viewfinder has a separate lens, so for close subjects an adjustment must be made, because the two are not in exactly the same place.

A folding camera does have the potential to produce great pictures, and the images will have a special look that is difficult to duplicate with a digital camera.
But it can be a challenging to take any decent images at all, whilst operating the camera itself is both great fun and incredibly irritating.  It could be a worthwhile experiment to test your skills, and one that will make you appreciate the features of you DSLR even more!

I personally often use them when I want to take a camera but intend to have a drink or two, like at weddings.  Also when I don’t want to worry about it being stolen or broken like on the beach.  The light weight folding design makes it easy to take anywhere, and I have also found no one ever says no when I ask to take their picture with a folder! 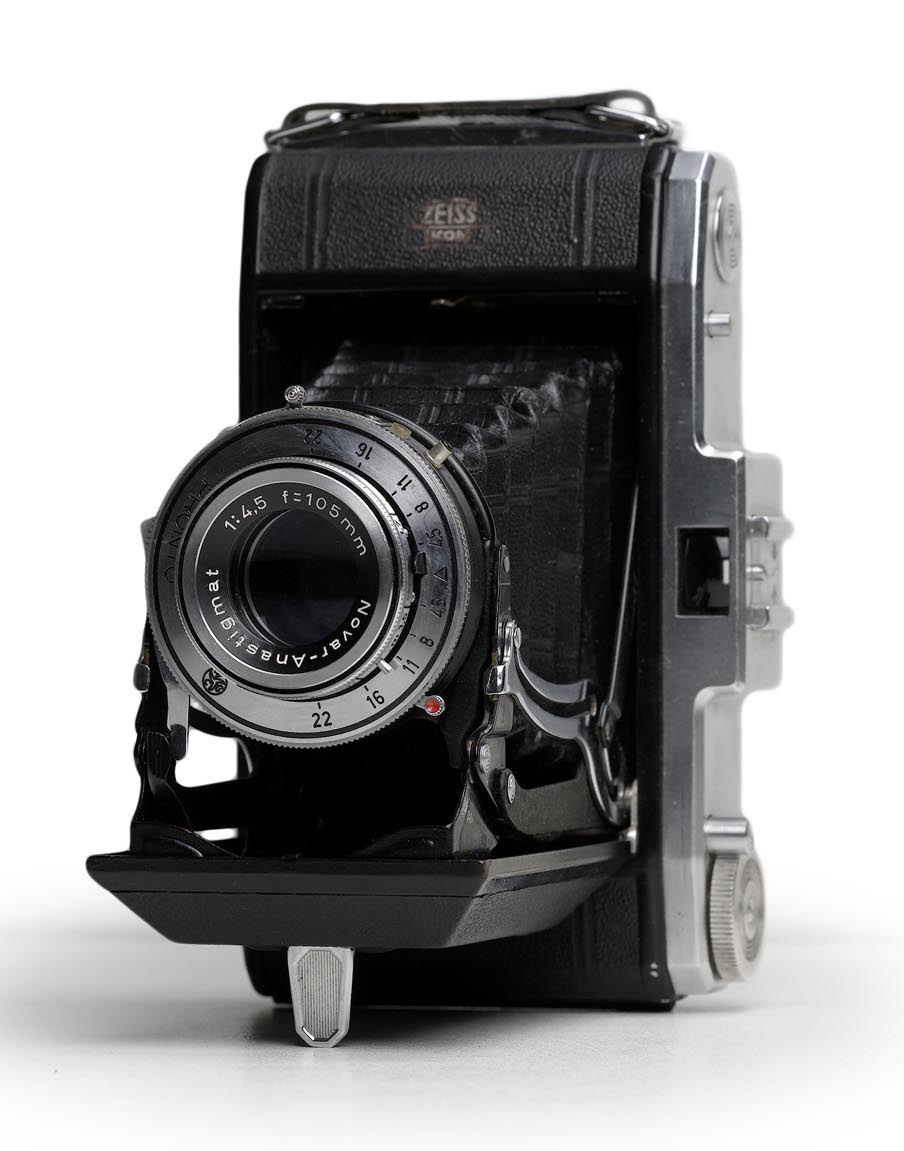 When buying an old folding camera, unless it comes from a reputable retailer, you really need to inspect it first hand.  These steps will help you assess weather the camera is potentially great or totally useless.

1/ Look through the viewfinder.  You may need to wipe away some dust first.  These are easy to remove and clean properly but a glance through here will give a good indication of the actual lens condition.
2/ On the back of the camera is a small sliding door.  Open this to check there is no film inside, if there is you may wish to think twice before opening it.
3/ Push the button on the top right of the camera, the front door should swing open on a spring.  It may need a little encouragement if it has not been opened in fifty years.  You can now inspect the lens and shutter at the heart of the camera.
4/ Check the back opens and closes ok, and that it is not bent.
5/ Look for wear in the leather bellows.  If there is so much as a pinhole on a corner it will fog any film you put through the camera.
6/ Check the focus ring, aperture ring and shutter speed slide move freely.
7/ Cock the shutter and check it fires on all settings, with appropriate change in sound.
8/ Open the back of the camera, select the widest aperture, set the shutter speed to B, cock it and hold down the shutter release.  You can now look through the lens.  Check for fungus and dust between the elements.
9/ Look for a PC flash sync, very useful to have.
10/ The final test, and if this works you can be almost sure everything else will.  Set the shutter to anything other than B, cock it and trigger the self-timer.  This is almost always the first thing to fail, so if it works you have found a good camera.

You are very welcome to link to this article but please do not copy or publish it elsewhere as that infringes copyright. We will know about it, you have been warned!

Your shopping basket is empty!